Hey everyone. So here’s how access to DQ2 builds is going to work for our alpha backers and testing volunteers.

Last time around, we just had a hidden “bug test” server where I would dump test builds. It was kind of a mess and not very secure. So I think a better solution this time around will be just using dropbox to give people access to the latest builds, that way I can share on a per-user basis and simplify the process of uploading builds.

The only concern is that not everyone may be able to use dropbox. Is it blocked in anyone’s countries or anything? Otherwise I think that will be the best way to handle this. Please let me know, and if so I will set up access for all of our alphas and testers.

We’re no longer going to be using BugZilla. Instead, we’re using issues posted directly to Github. So if you want to report a bug “for real”, head on over to https://github.com/larsiusprime/tdrpg-bugs and click on “issues.” (You will need a Github account). We have a category on this forum for bug reports because we know we’ll have them posted here anyway so we might as well organize that, but the preferred location is Github.

Here’s an example of a good bug report.

I’m now using waffle.io as my personal bug tracker. This is a tool that gives you a more robust interface for issues, formatting them much like trello does, but with the added benefit of already being tighly integrated with Github.

Even better, I can mix in several repositories at once, so I can see publicly reported bugs with my own team’s internally reported stuff, and also drag in related work from the HaxeFlixel project. In short, this takes all of my different work channels and put them all in one place so I can focus. 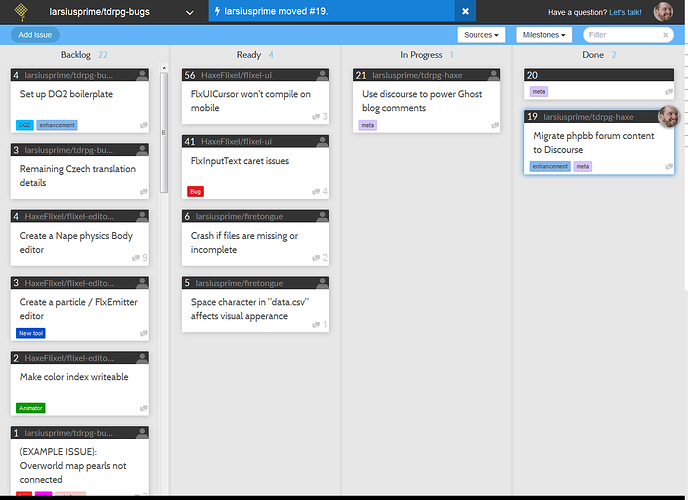 Now it’s time for me to get to work!

Dropbox works well for me (France). Will bring feedback on the builds themselves soon

Hmm, I very much preferred a simple download. I most certainly don’t fancy installing proprietary 3rd party software on every machine where I’d want to fiddle with DQ.

If it’s not possible to make the latest build available i.e. on https somehow, I’ll probably stomach it and install dropbox on linux, but I’d much prefer not to.

I think if we use dropbox you won’t necessarily have to install anything (I’ll need to research to confirm).

We could just create some download links, and then control access to who is allowed to download from them. If this works the way I hope, all you’d have to do is create a dropbox account, but you wouldn’t actually have to install the software.

UPDATE
Hmm – looks like this might be more complicated than I thought. I might have to just default to some read-only links behind a nominally secret page like we did before unless I want to insist on people installing a bunch of software. Not super secure, but it’s not like I’m guarding nuclear secrets or anything here (I just want alpha builds to not get much attention from non-testers as they’re so early in development)

Dropbox is working fine in Portugal (well, you should probably know it since I use it so you can keep in touch to modifications to my translation, and talking about that I think I should continue, but after school ends).

Oh and you don’t need to download Dropbox, you can use the webpage and login without any downloads.

By the way you could create one account for us testers to use like in the test page, yeah not really secure but right now it’s the bestion option I guess. Not sure if 2 people can login at the same time without causing a block, it is the only concern I can think of right now.

Alrighty, did some tests in the Secret Forum (feel free to pop in there if you have alpha/tester access), and these were the results:

So for now I think the answer is going to be Google Drive. Hopefully this lets me just set up access permissions once for everybody, and from them on you just click on links and everything Just Works.

Anyone have a problem with this?

Just posted our test build on the secret forum. Check it out, testers!

Hopefully this lets me just set up access permissions once for everybody, and from them on you just click on links

While logged into Google, I visited the emailed link and was able to add it to “My Drive”. So now I (and anybody doing the same thing, which is why I’m mentioning this), can just go to the drive section, click on “My Drive” on the left, and see a folder on the right with Lars as the owner. I think this will turn bold whenever a file in there updates (although it may not work for sub-folders). (Of course, I’m assuming any new build will also be announced anyway.)

Looks fine from my end of Google Drive.